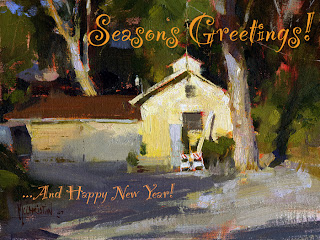 Feeling festive and foolish, sipping spiked eggnog, I sit here ecstatically contemplating my blog....
Holidays are fast encroaching as the year is coming to a close. I'm
writing now from my brain which is sitting in a warm and cozy skull, safe from the rain and elements.

This painting was done on the grounds of the ‘Barlow Respiratory Hospital’ located in Elysian Park (just minutes from the Dodger Stadium), where lascivious and restless young men meet, greet and generally frolic amongst the brush and foliage. Oh, if leaves could talk! When I first arrived at this particular building/bunker I assumed it was abandoned due to the general disrepair. “Was it a ghost I see!?”.... thought I, as an old man in hospital scrubs strolled casually past, pulling an oxygen tank behind him. A quick toss of a rock told me no, he was flesh and blood just like me! When confronted by this angrily gibbering lunatic, my painting comrade Jose told him in no uncertain terms that he shouldn't smoke a cigarette at a respiratory hospital, certainly not while pulling an oxygen tank! This quick guilt reversal seemed to do the trick, and we painted in an uninterrupted manner for the remainder of the very cold and brisk afternoon.