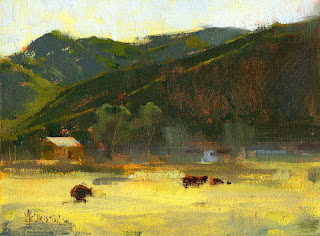 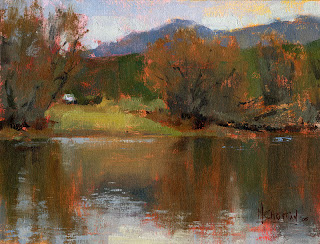 'Lower Lake, Rose Valley'.........oil on canvas panel......... 6x8"
The following day, we drove a few miles north of the ranch and discovered a small, deserted fishing lake nestled in a valley across from an abandoned inmate labor camp. Sweet! Although the labor camp was obviously uninhabited for years, my vivid imagination left me feeling disquieted and paranoid at the prospect of a crazed and dangerous convict at large charging towards Ben and me. I walked around the lake until I found a view that appealed to me. I used Ben's car parked in the distance as a focal point to offset the placid composition.
The cool, overcast weather provided ample painting time, however, I painted hurriedly due to my paranoia, the random gunshots in the distance and fresh bear poop on the trails leading to the lake. Oh, and it was freaking cold!!
Posted by Jennifer McChristian at 9:34 PM

Jennifer, These two paintings are wonderful. Especially,"Resting Cattles" is very strong piece.
I love it.

Thanks Kee! :-)
I'm planning on painting a larger studio version of 'Resting Cattle'. Hopefully I can maintain a similar essence to the little sketch study.

I really like the freshness of these small paintings!!

I find it very challenging to enlarge from a small image and I can't wait to see your larger studio version.

Wowie! Reminds me of driving north to Santa Ynez valley. Captured it again! Words fail... but my eyes and mind are grooving.

Woow!
You are something else!
These look so fresh,amazing how you get down to the essentials,
Your Christmass was better than mine...lol...

Thanks Andrew...
Happy New Year to you as well!

Bill,
I've actually never been to Santa Ynez. Perhaps that can be another painting excursion we can plan?

Rob,
Thanks for the lovely comments.
This was the first Christmas I enjoyed in a while.
It's always a treat to be able to combine plein air painting with my vacation(s).

Gorgeous, great paintings. I can even feel the cold in the painting. Wow.

The Lower Lake Rose Valley one is really nice! The calmness of the water really comes through... and effect of the sky reflecting in it is brilliant. Also like the bits of red / orange left in the tree on the right.

great job with both

Thank you for the lovely compliments!

Resting Cattle is fantastic. Your ability to capture space and light is inspiring. Best of luck in the Supersized version!
Cooper

Thanks Cooper,
shhhhhhh...don't say 'Supersize' in front of the cows! ;-)

These paintings leave me salivating with jealousy - literally! Do you have any tips for a desirous plein air painter who always seems to end up with mud? Your colors are so vivid, and yet you somehow avoid the technicolor look - do tell!