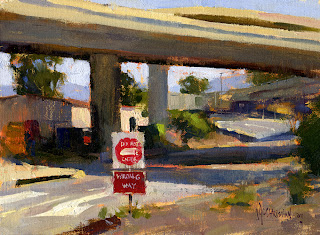 'Do Not Enter - Wrong Way'.........oil on canvas panel........6x8 inches
Walking along Riverside Drive which runs adjacent to the '5' freeway, I discovered this delightful cityscape of concrete canyons draped in lush, green vinery. I set up to paint directly across a freeway exit while Jose settled for a more panoramic view of the overpass. Being engulfed by a swirling mass of exhaust fumes from cars exiting the freeway was exhilarating, and I hoped that some small grit from the freeway would imbed itself on my canvas like a gnat might for my country bumpkin counterparts. Two homeless men of good cheer emerged from the shadows, one carrying a sporty homemade spear created from an old broom stick, a sharp piece of rusted metal, all wrapped together by a coat hanger.  He claimed to use it for his fishing expeditions in the L.A. river. His compatriot was dressed in an old military jacket doused in vodka, and was incapable of human speech, making only gurgling and clicking sounds which attracted several squirrels to him. With large toothy grins they invited me and my painting buddy Jose to join them in a jaunty walk by the LA River in search of fairies and magic, talking catfish.  I declined, silently feeling inside my backpack for my pepper spray. Good times......;-)
Posted by Jennifer McChristian at 11:22 PM

great colors in the shadows jennifer they make the light bits pop
nothing beats painting on location
all the infuences and even the distractions help...in the end it is all about feelings

Great one Jennifer! I love the road sign (I just painted one myself on my latest blog too!) Great composition in yours.

Great painting, always a treat to see new work from you.

The story give a whole new meaning to those signs

I was so excited to see this piece as I myself love to paint freeway bridges! Nice one, I really like it. And it wouldn't be a complete painting without the unstable people factor. I should carry pepper spray like you, but I find myself reaching for my palette knife during those times. Well done.

Fantastic painting and a great story too!

A Jennifer great! The solid drawing provides a springboard for the other sublime areas of this beautiful painting. Color .. did I mention the chiaroscuro... tone, drama... balls... yeah I said it.. see you saturday.

Forgot to mention.. Love the back story.. you know that theme is right up my alley.

Great painting and a great story! Funny that William K Moore mentioned it, because it reminded me of some of his stories.
It is amazing that the picture is so small. The richness of color is wonderful and your treatment of light.

Thanks for linking me up! I'll do the same. I aspire to paint with the penache that you do! Those 'boys' who visited musta been a little spooky! A Spear? Whew!

very cool composition. The first thing that struck me was the fact that I could actually read the sign "wrong way"!! It starts something happening at a whole new level for me!! (me + car = accident LOL)

Love the way you push the paint. As always great color, edges,composition........

A good treat. Good thing you had a compadre with you since you had visitors.

It's all been said.
That's a powerful painting!

That is a funny story. Can't imagine painting on a freeway exit ramp. That takes artistic guts.
Things I like about this painting.

The glow of the building under the overpass and what looks like a figure there?

The turn arrow in the forground

The unified feel of the whole painting. Bravo!

I agree; the impulsive and visceral reaction to our surroundings when plein air painting can be quite exciting and exhilarating ....(and sometimes dangerous)

By the way, checked out your 'road sign' painting and must say I was enamored by it :)

hmmmmm......... I never considered a palette knife as a means of defense. I'm sure it could cause severe damage if used in the right places ;-)
Thanks for your visit by the way.

.....I'm glad you enjoyed the story.
BTW, good you could join us on Saturday mornings again!

Thank for linking me up as well.

....actually, what would have been really spooky is watching the 'boys' stampede towards me with the spear wearing only their shoes (and toothy grins)

Thank you Michael,
the composition is one of the components that compelled me to paint this particular scene (and the dominant road sign is a fetching focal point too)

......don't forget to always buckle up when driving!

Thanks for visiting Tom!
.....very much enjoyed perusing through your blog.

Thanks Chris,
yes, a sane and friendly compadre can be quite handy should a dangerous predicament arise while plein air painting
( pepper spray and palette knife help too)

Robin,
I appreciate your observant, articulate and generous comment.
Thanks!

New fan of your work. Found you via Frank's links. Great stuff that really treats the eyes and senses.

As usual great work! In these situations you might want to carry a sharpened paintbrush to defend yourself!

Thank you Wayne and Gerald!

..ahhh yes, a sharpened paintbrush- yet another great suggestion for self defense.

By the way, welcome back...you've been missed!

Jennifer, your painting is part of my post on my blog. You may want to read it...